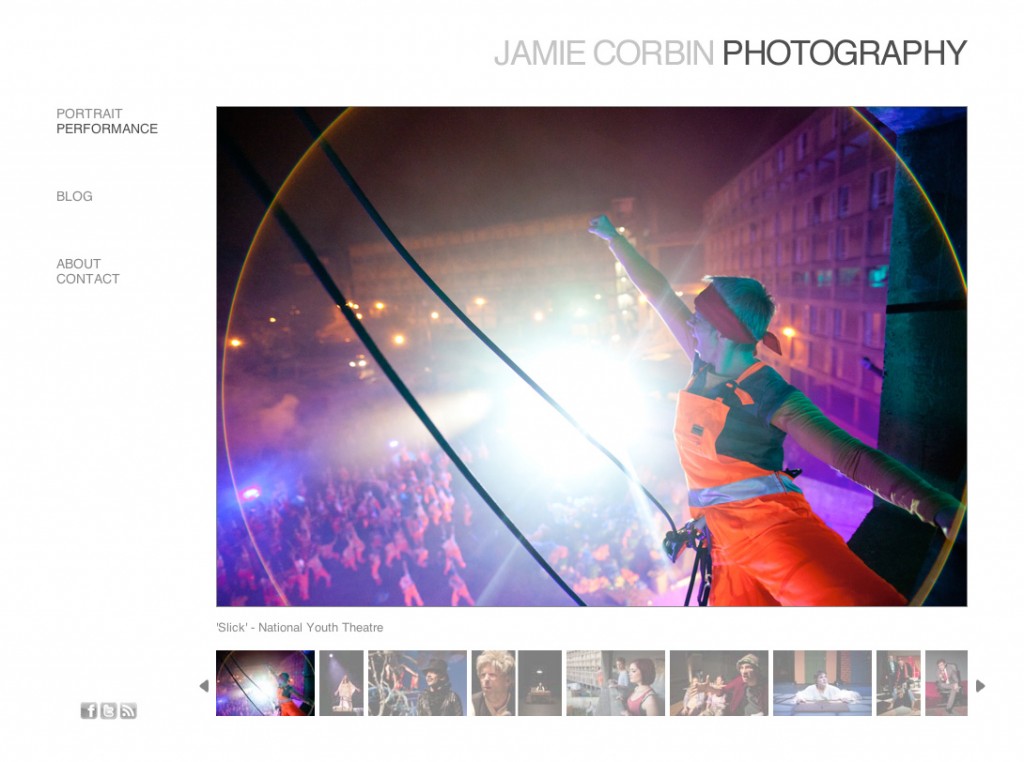 It’s taken a few weeks to sort through quite literally thousands of photos but I’ve finally finished a fairly major update to my portfolios! You can see my Performance photos here and this is my Portraits portfolio.

It’s never easy trying to put a portfolio together. It sounds like it should be simple – pick out a few of your best photos, put them online, job done! But sit down to do it and you find yourself caught between wanting to show off every single image you’ve ever taken and, at the same time, plagued by a nagging feeling that none of your photos are really as good as you’d like them to be. In the end though you have to just get on with it!

I think the most important thing to keep in mind is focus. The questions to constantly remember are – ‘who is the portfolio for?’, ‘what do they want to see?’ and ‘what do I want to show them?’. As a working photographer my audience needs to be people looking for a photographer – potential clients – and I need to show them the kind of work I want to do!

With my performance portfolio I think I’m getting there. I’ve a good range of work and, while it’s pretty obvious that most of what I’ve done to date has been youth theatre orientated, I’ve taken images of productions with casts of as few as one up to several hundred strong in all kinds of theatres and locations. So I’d hope it shows I can take on pretty much anything that’s thrown at me and produce good images.

My portrait portfolio however isn’t really quite where I want it to be. I think it shows my style – I like clean, simple images and for my subjects to have fun and really enjoy being photographed – and I think a lot say something about what their subjects are like as people. But I want more photos that tell a story about the people in them. Stories about who are they, what they do and where they do it – photos that give you a real feel for them. What I have right now is very studio heavy and I’d like to have more photos of people in their own environments. So I think it’s time to get out there and start taking some photos to fill that gap. I need to get organised and make time for some personal projects producing images that are what I want to be paid for. I’ve a few ideas I’m working on so watch this space!

With all the technology that Amazon has, why does it bother to go out of its way to offer free shipping on most things? Amazon Prime and Amazon’s shipping service are so big, they have become a large part of the company’s business model. In fact, for the past year or so, the company has been working to roll out new benefits for Prime members, such as better access to Amazon Prime shipping, access to free movies and shows, and free 2-day shipping for most orders. But at a time when the Internet has become a de facto shipping solution, it is difficult to compete with free.

There are two good reasons for the cost difference. One is that Amazon would rather have a $99 per year Prime member as its customer base than a $10-per-month Amazon Prime membership for someone who only bought the products once or never even got around to buying them. The other reason is that customers are less likely to keep the subscription if it’s offered to them for free.

Amazon has been trying to address these two problems, in some cases creating new perks that get some of its customers to opt in or create a new discount version of the Prime membership program. The new discounts aren’t always as attractive as a free Amazon Prime membership, but the discounts are certainly better than nothing. In other words, they’re a step in the right direction. But the problem remains the same: people still haven’t gotten to the point where they don’t want the subscription.

I’m personally interested in signing up for Prime for a few reasons. In addition to not having to deal with shipping or packaging costs, I also like the benefits that Amazon Prime offers, especially when I couple those benefits with the coupon codes I find at https://www.raise.com/coupons/amazon. I like the fact that I can pick up pretty much anything from Amazon, and then buy it a few weeks later. If Amazon were to launch a streaming service of its own, I would be all for it. If you’re reading this, you probably already know that my top priority for Prime is Netflix, which I feel is the best subscription service currently on the market. It’s also much less expensive than Prime, so that’s another plus. But, at the end of the day, I still feel it’s worth the $99.99 to have the benefit of watching unlimited movies and shows whenever I want.

And yet, despite my feelings on the matter, there’s one thing that gets me absolutely upset whenever I hear that Netflix is the one streaming service in town.

I’ve spoken before about my love for Amazon’s Kindle Paperwhite, and for good reason. It’s one of my favorite gadgets, and the display is gorgeous. However, while the Paperwhite may be my favorite phone of all time, I don’t really feel the same way about the Kindle, because, well, it’s a Kindle. I don’t feel the same way about the Apple iPad, or the Samsung Galaxy Nexus, or the Nexus 10. In fact, my experience with these devices has never been all that great.